(once a day, to be taken at the same time)

-It Helps Boost your Immune System

– It Helps Reduce Hair Loss, promotes growth of Thicker fuller hair, while making it grow faster and longer.  Aside from Whitening, this Detoxies the Liver and also has Anti-Aging Properties KB GLUTA Plus NAC (N-Acetyl-L-Cysteine) plus Rosehips is the First Oral Glutathione in Free Form with NAC and Rosehips. KB has its Own Formula approved by the BFAD-FDA Philippines and the First Glutathione with HALAL Certification.

This has NAC (N-Acetyl-L-Cysteine) which is More Stable and effective Anti-Oxidant which provides Better Absorption of the Body. During the digestion process, Glutathione loses a major portion of sulfur, its active component. This is where NAC, or N-Acetyl L-Cysteine, comes into the picture.

NAC, itself a powerful antioxidant, is found to perform better and boost glutathione at its best, thereby increasing your glutathione consumption in the body. It is much better and more stable than Alpha Lipoic Acid (ALA) in its respective function.

NAC is quickly metabolized into Glutathione once it enters into the body. It has been proven in numerous scientific studies and clinical trials to boost Intracellular Production of Glutathione KB contains 500mg L-Glutathione with NAC and 500mg Pure Rosehips Vitamin C. The optimum dose of NAC make the most of oral glutathione supplementation. Rosehips Vitamin C is in its pure organic form in a time-released quality.

The first with a unique formulation, the KB Company has factories located in Korea and Japan.

The skin whitening pill is manufactured under the strictest standards of experts and best amino acid manufacturers in the world.

KB skin bleaching pills are claimed to be the next best thing to intravenous glutathione or IV glutathione – regarded as the fastest, but most expensive, means to whiten skin

HOW TO USE? One Complete Whitening Set consists of the following:

This should be taken ONCE A DAY ONLY!

Take note: This product is 100% pharmaceutical grade meaning there is NO ADDITIVES so you don’t need to take it twice a day unless you have health problems.

One box is good for 30 days consumption. 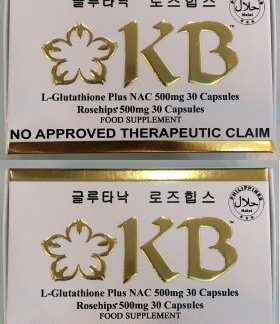 If you are buying Multiple/Wholesale items, please email us at Joodleshop@yahoo.com or text us at Whatsapp or Viber +63916 5314794 and we will make Combination Sets for you. We accept Direct Credit Card and Debit Card payments upon Check-out Dismiss